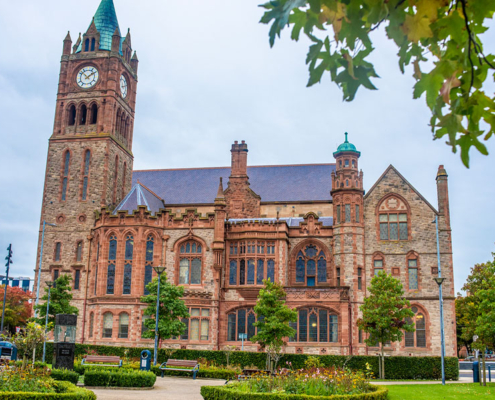 One of Derry’s most recognisable landmarks and at the heart of the city since 1890.  As well as being home to the Council’s Chamber and Mayor’s Parlour, the Guildhall is a must see visitor destination.

A warm welcome awaits you at the Guildhall, one of Derry’s most recognisable landmarks that has been at the heart of city life since 1890. As well as being home to the Council’s chamber and Mayor’s Parlour, the Guildhall is a must see visitor attraction where you can be sure of a warm welcome.

Soak in the legenderry spirit, while our local tour guides take you on a journey through this majestic building, with local historic tales to tell along the way.

While visiting the Guildhall you can see the dazzling stained glass windows, experience the Plantation of Ulster exhibition, see the main hall and organ and enjoy our local hospitality in Café Guild. 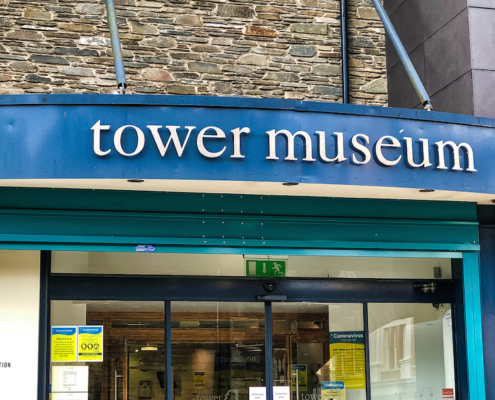 Enjoy The Story of Derry and An Armada Shipwreck – La Trinidad Valencera on your visit. Experience our stunning open air viewing facility which takes in beautiful panoramic views of the city and River Foyle.

This fascinating exhibition shares the story of our city from early settlement through to the Plantation of Londonderry and on into the growth of Derry during the 18th and 19th centuries. Life during the 20th century is also explored, in particular the build up to the Civil Rights Movement and the impact of the Troubles on the people living here.

Dive into the story of La Trinidad Valencera, one of the largest ships in the Spanish Armada Fleet. In 1588 it sank in Kinnagoe Bay in Co. Donegal and was discovered nearly 400 years later by divers from the City of Derry Sub Aqua Club. The exhibition explores the story of the soldiers and sailors aboard the ship and the divers and archaeologists involved in the excavation.

The Walled City 400 Years Exhibition
2019 marked the 400th anniversary of the completion of Derry’s Walls, considered amongst the finest in Europe. Built between 1613 and 1619 they were the last to encircle an Irish city. Today Derry’s historic walls are the most complete in Ireland.